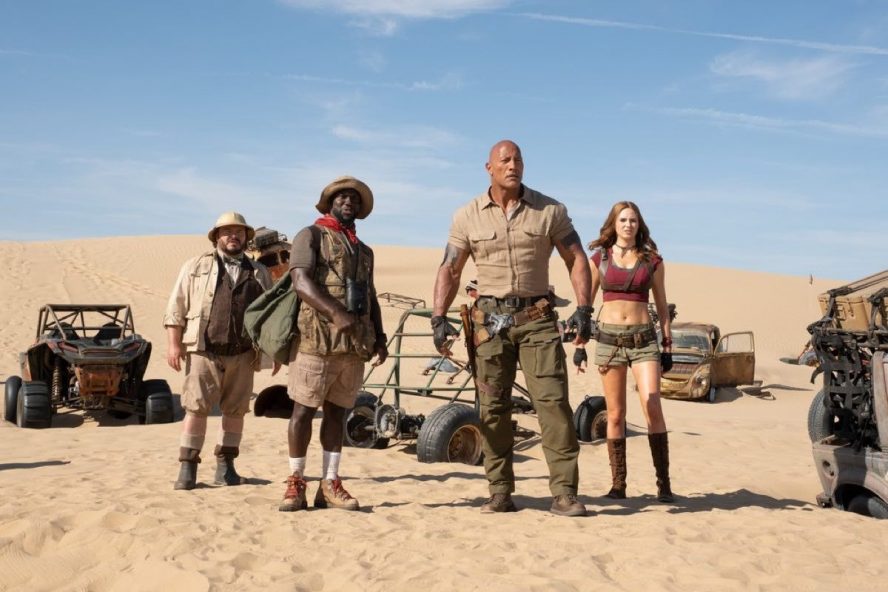 Lower your expectations. While 2017’s Jumanji: Welcome to the Jungle was a welcome update to the Robin Williams ’95 classic, this year’s sequel is a surprising dud. Jumanji: The Next Level is a recycled copy of its predecessor, sans the humor and spirit that made that film so special.

The Next Level opens to a few years following the events of Welcome to the Jungle. I’ll assume you’ve seen that movie, but should remind viewers that the four teenage stereotypes (a Breakfast Club of sorts) learned valuable life lessons from their experience in Jumanji. Popular girl Bethany (Madison Iseman) learned there is more to life than the perfect selfie while trapped in the body of a middle-aged fat man named Dr. Shelly Oberon (Jack Black). The jock, Fridge (Ser’Darius Blain), learned a bit of humility in his avatar, the minuscule sidekick Mouse Finbar (Kevin Hart). The rebellious Martha (Morgan Turner) sheds her shyness as the butt-kicking Ruby Roundhouse (Karen Gillan). All but Spencer have moved onto bigger and better things, even after enjoying his Herculean experience as Dr. Smolder Bravestone (Dwayne Johnson).

Spencer, on leave from University, spends most of his day moping around for reasons unknown – a lazy filmmaking stratagem to rebuild the destroyed video game console. Spencer longs to return to Bravestone (to regain the confidence he supposedly built the first time around), but in doing so unwittingly sucks back in his friends, along with his grumpy Grandpa Eddie (Danny DeVito) and Eddie’s estranged business partner Milo (Danny Glover).

For the most part the game plays out exactly as the first, updated with a few new locations, new villain, and avatar roles are mixed-up. The players, each armed with three lives, must recapture a Jumanji artifact from evildoers or risk getting trapped in the video game for life. The playfully sadistic premise is still highly amusing to younger screen-raised audiences with its high-end set-pieces and well, the “Rock” making a DeVito impression. For more discriminating audience members, however, it’s apparent Next Level isn’t offering any new ideas. The teens and elders get to experience all-new avatars this time out, but by the end of the movie, do not learn to succeed in someone else’s shoes. This aspect of the film is what made the 2017 remake so special, but here it gets lost in the jungle.