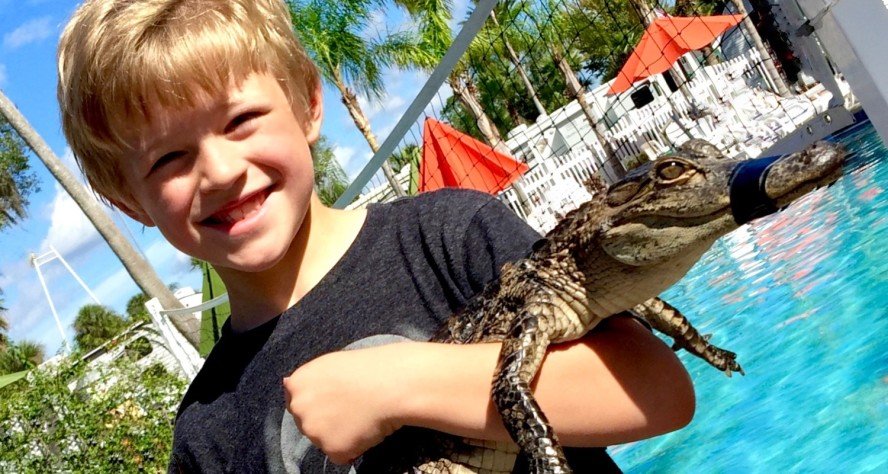 The following review of TROPICAL PALMS CAREFREE RV RESORT is based on our personal experience. Any opinions expressed are our own.

Tropical Palms Carefree RV Resort (Kissimmee, FL) is managed by the folks at Carefree Communities, the fifth largest operator of motorhome and recreational vehicle resorts in North America. We chose their Orlando location based on advertised amenities and close proximity to Walt Disney World, but as quickly as our stay with Tropical Palms began, we discovered the resort wasn’t as carefree as promised.

Tropical Palms Carefree RV Resort is located only moments from its Interstate 4 exit. This made Orlando navigation much less stressful for worrywart drivers like myself. The resort is exceptionally landscaped and appears to be well-maintained in most areas visible from the entrance gate. The customer service desk was not staffed appropriately, which made the initial process of receiving campground rules and site location hectic. The campground recently changed their dues to include electrical usage, but they could not explain how that process was documented or an estimated price per kilowatt hour. The grounds personnel will guide you to your site and assist you in backing-in if your site requires.

The Tropical Palms website has since migrated to the Carefree Communities site, but the original resort ads claimed all sites would be either concrete or grass. We received neither. We rented a site in the “economy” zone, which apparently meant our motorhome was required to sit upon dirt and muck. This “economy” zone is located in the rear of the resort and is painfully neglected by grounds crews. The kids found various articles of trash and old clothing embedded in the dirt lots and even found an abandoned umbrella stroller discarded behind some trees. When it rained, our site would became a mud pit that always found its way into our home. Our elderly neighbor raked piles of dead leaves for three continuous days before any personnel would respond to his request to have them removed. The quality wasn’t what we expected or believe we paid for, so we challenged the resort (incl. @CarefreeRV) on four separate occasions. I can’t say anyone made an even half-hearted attempt to address our concerns.

About halfway through our stay, the water stopped working at Tropical Palms. The resort had damaged a water line. The water would return several hours later, but over the following weeks the water would be shut down for repairs, again, for multiple hours at a time. To make matters worse a boil-water requirement was placed upon many resort residents. Our zone was not specifically affected, so we found out through signage on the office door, but when questioned about other zones, office staff could not guarantee the water was safe. Imagine having undrinkable water flowing through your home for ten days without adequate warning.

Despite our dissatisfaction, there are reasons to consider this campground. Most important to us is that Tropical Palms Carefree RV Resort is conveniently positioned near the most magical place on Earth, Walt Disney World. The drive is quick, about 3 miles North of the resort, but we recommend utilizing the Lynx city bus system to save a ton of cash on parking. It makes a stop every 30 minutes about a quarter mile from the resort office and drops you off in front of the Disney Transportation and Ticket Center. Easy and cheap. The resort offers its own free transportation, but after having been abandoned at Epcot (yes, they forgot to have us picked up!), we decided not to waste our time and safety ever again.

For those travelers looking to avoid Disney, there’s an amusement park and shopping center a very short walk from the campground called Old Town USA. We steered clear of the amusement park instead opting to enjoy the weekly classic car shows and cruises. There’s a fantastic magic shop and haunted house located here, but the real gem is quite literally a gem shop. You have to check out Black Market Minerals!

The campground itself offers various outdoor gaming courts, two pools and a putt-putt course for those guests wanting to stick close to home. Families will appreciate the kiddie pool that’s adjacent to a clean and secure play structure. A large modern laundromat overlooks the playground so that parents may watch their kids while catching up with chores. By the way, there are tons of kids at Tropical Palms! The bigger pool hosts kids activities and live gator greets every Saturday morning, while a “dive-in” theater operates the same evening.

I would avoid the cafe as prices are too high for the mediocre food. The main office though, stocks a generous pantry and beer selection, as well as common RV and household items. It also houses a small (and mostly defunct) work-out room. We never found the walking/biking trail advertised on the website. There are multiple bath houses throughout the resort. The two we used were always clean, though I’d recommend wearing flip-flops in the showers.

You almost can’t beat the proximity to Disney (see The Campsites at Disney’s Fort Wilderness Resort) and there are plenty of on-site activities for kids and adults to enjoy, however, I don’t think we will ever stay with Tropical Palms Carefree RV Resort in the future. At least until meaningful and transparent changes are made to customer service. The welfare of residents should come with the foremost sense of urgency. In my opinion, a clean and safe site is not an unreasonable expectation. We will avoid if possible.