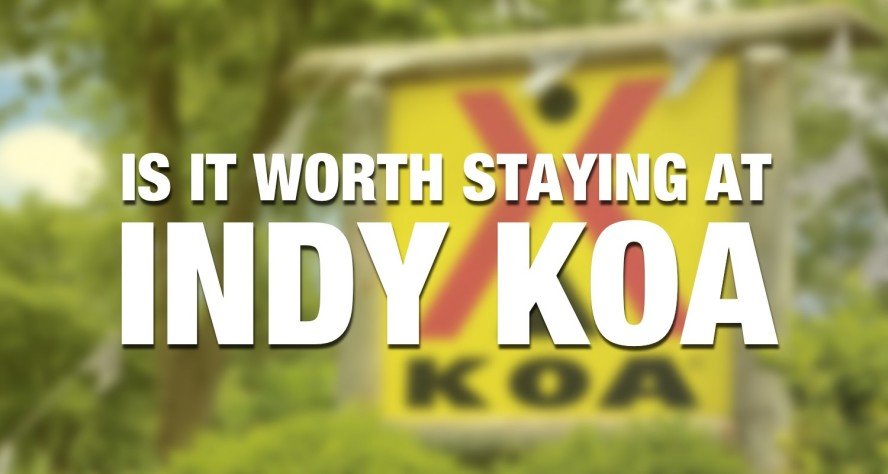 The following review of INDIANAPOLIS KOA is based on our personal experience. Any opinions expressed are our own.

The Indianapolis KOA was founded in February 2005 and is minutes from Downtown Indianapolis. The campground accommodates large RVs, tent camping, and everything in-between. There are various size cabins on-site as well as a large gathering hall and well-stocked general store. But is this KOA campground worth-it for RVers?

The Indianapolis KOA is located just outside of Indianapolis in Greenfield, Indiana. It lives directly behind Mount Comfort RV Dealership on Exit 96 of Interstate 70. It is extremely easy to find and move about the park in a big rig RV. We were very impressed with the landscaping and building upkeep upon arrival. It appeared to be an exceptionally maintained park. The KOA office and store was equally as impressive; both clean and well-stocked with all the necessities for camping.

We are hyper-critical of customer service at Roadiculous HQ, after all, we are customer service professionals. This is one department that most RV parks fail. The Indianapolis KOA is not an exception. Check-in was pleasant, until it wasn’t. It happened that our stay fell onto the same weekend as the Indianapolis 500. We reserved one month of stay, but were later told we had been overbooked and that we would be required to move off-campus for the weekend-long race. Mistakes happen but the desk employee was not interested in helping us find a solution or even apologize. The attitude was to accept the injustice or you can leave. With the big race looming and local parks full, we had no choice but to accept and stealth camp for three nights.

Groundskeeping is Indianapolis KOA’s forte. This team prides itself on having sterile public areas and crisp healthy landscaping. We staked our claim on one of the campgrounds luxury sites, hardly regretting the decision. Luxury sites feature spacious pull-throughs long enough to accommodate our 43′ motorhome plus multiple personal vehicles or toys. Cement decks are exclusive to luxury sites, but also come equipped with built-in fire rings and the standard picnic table – every site, including tent sites, have them as well. Grass was cut twice per week, but for those campers with children or pets, we observed grass/weed killer and fertilizer in use frequently around the park.

The Indianapolis KOA receives well-water that has a noticeable iron smell and taste. It stained our plumbing and fixtures. I highly recommend using a filter at the tap, though I’m not totally sure that will eliminate the issue. It certainly won’t help the park’s already dismal water pressure. We also had electrical issues, but those were promptly fixed by the park staff.

The Indianapolis KOA is outrageously expensive considering the lack of amenities. The cost is considerably higher than many luxury Florida resorts with no discount program for travel clubs other than the KOA membership.

The park operates a seasonal pool that is falling apart and tastes of iron. The gathering room is empty with no planned activities as far we could tell. Website images give the false-impression there might be horseback riding. The fitness room is literally an exercise bike and elliptical machine in the laundry room. There is a large well-kept dog park with ample seating for pet owners but not one park bench for parents at our nearby playground. There are bikes available for rent for $5 per half hour, though there are no riding or hiking trails.

The Indianapolis KOA is 15-minutes drive from any grocery or general goods store. Interstate access is convenient but at the expense of considerably obnoxious road noise at night. We did not notice the claimed 24/7 security.

The Indianapolis KOA is an impeccably maintained park ruined by its unjustified prices and too few amenities. There’s just nothing to do after the pool has taken its toll, and you’ve visited the horse and circled the park by bicycle. The staff are great about leaving residents alone, but the park also has a lonely vibe about it. Is the Indy KOA worth it? At an eye-popping $65 per night, no it is not. To put that number into perspective, The Campsites at Disney World’s Fort Wilderness Resort is only $10 more per night.